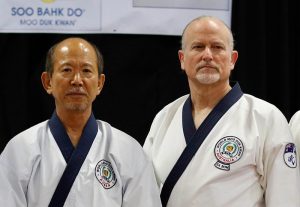 Welcome to William Johns SBN (Yuk Dan, Dan Bon 20535), a member of the Australian Federation, who many of us met recently at SEALS 2018 in Melbourne.

Johns SBN is a man with a great vibrant sustained Moo Duk Kwan heritage and is a direct student of our Kwan Jang Nim. Fortuitous for us here in Australia, this qualified senior resource can be called upon regarding protocols, procedures, combinations and history. He now is opening a dojang in Albany Western Australia, a lovely part of the world.

By way of background, Johns SBN began training in 1973 in Alaska, USA and later opened a dojang, the Pyong Ahn Institute, in 1978, as a uni student at Florida Institute of Technology in Melbourne, Florida. The Pyong Ahn Institute was very successful and grew to be larger than any other sport or athletic organisation on campus.

Wanting to get closer to the art, Johns SBN became Kwan Jang Nim’s student in 1978. Graduating university in 1980, he moved to Homestead, Florida and began teaching full-time; expanding during the 80’s to a peak of five dojangs and training more US Federation members than any other principal instructor in the USA at that time.

Over time he provided targeted specialised training to the Homestead Police Department SWAT team, multiple Police departments, the Department of Corrections and members of the US Customs Service and military personnel stationed at Homestead Air Force Base.

In 1987, Johns SBN tested for Ko Dan Ja and attended as a guest each year after. Hurricane Andrew hit Homestead and destroyed all his dojang, causing a move to New York in 1992 where teaching resumed. He represented the USA at the 50th Anniversary of the Moo Duk Kwan in Korea, with a demonstration of the Sip Sam Seh with Schermerhorn SBN. Johns SBN has coached and competed locally, nationally and internationally.

His practical experience will help provide us as juniors with access to ideas, skills and a sounding board for growth into the future.

In 2008, Johns SBN forwent his Chil Dan testing to stay in Sweden to provide hospice care to a dying friend. He took time to then assess his life direction and associations and moved to Australia in January of 2012. Discovering that Kwan Jang Nim was about to visit Australia for the 2018 SEALS, he grabbed the opportunity and reconnected to the art on many levels. This rekindled his relationships with Daymon Kenyon SBN and again with his instructor Kwan Jang Nim.

Sorry, the comment form is closed at this time.